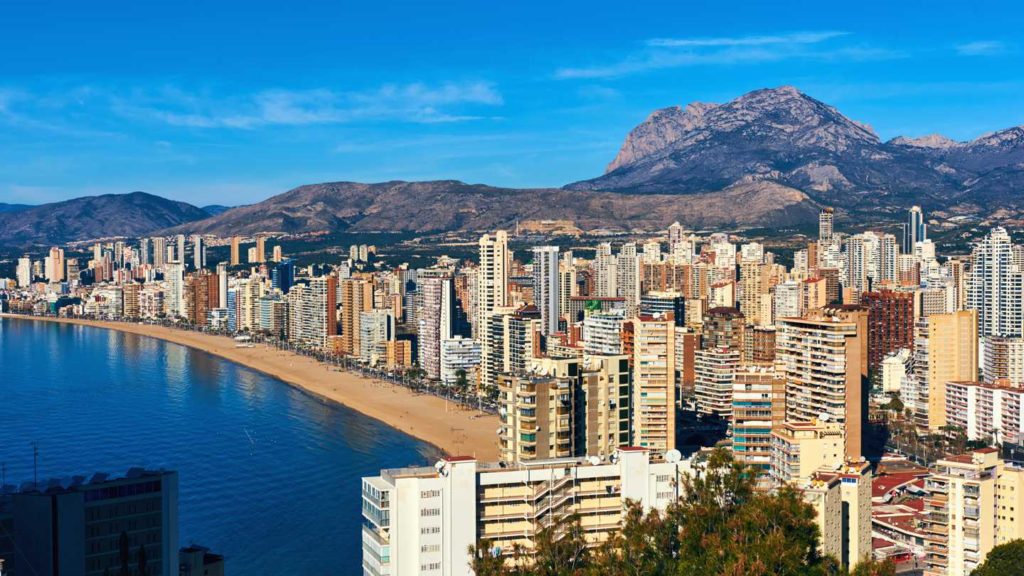 Alicante is a province that is considered to be the most popular among tourists in the Valencia region. The famous resorts of Benidorm, Denia, and Torrevieja are located precisely here. The airport of Alicante receives 6 million people annually.

What attracts tourists in Alicante? Of course, there are ample opportunities for spending the summer holidays. The province is home to the most famous resort area in Valencia – the Costa Blanca. Over the past ten years, it has been able to compare in popularity with such recognized capital cities of Spanish tourism as the Costa Brava and the Costa del Sol. The Costa Blanca has the largest number of beaches with a “blue flag” – a special sign that the EU awards to the beaches for their high level of cleanliness and developed infrastructure.

Today people come from all over Europe to spend the holidays in Alicante. And not only Europe! The Spanish themselves, who know a lot about relaxing, choose Alicante for the summer holidays. Benidorm is even called the beach of Madrid for its popularity among the residents of the Spanish capital.

The most friendly municipality in Spain – that is what Alicante is called on the official website welcome page. Alicante actually has a surprisingly friendly atmosphere! It is interesting, fun, and warm here almost at any time of the year. You will find many reasons to call this place the best you have ever visited! Alicante has a Mediterranean climate with mild temperatures throughout the year.

In the province of Alicante, many cities deserve the closest attention. Elche, the green capital of Alicante. Elda and its small castles. Alcoy and its famous costume parade Moors and Christians. And, of course, many cozy villages along the seacoast.

Alicante is the first city seen by most of the tourists arriving at the resorts of Costa Blanca. The history of Alicante, which began more than two thousand years ago, is still alive on the streets.

Benidorm is a resort whose rapid rise today has become one of the brightest examples of success in the history of tourism development in Valencia. A few decades ago, the idea of a holiday in Benidorm sounded like something weird to the average European. Only knowledgeable Spanish people and a few wealthy European residents, who preferred to spend days here, since the end of the 18th century, could tell about a small village 40 km from Alicante. And they wanted to keep silent about this beautiful hidden place. They hoped to keep this tiny corner of the Spanish coast away from the tourist noise. However, they failed to make a nouveau riche reserve out of Benidorm.

Denia is a popular resort in Costa Blanca. It is located at the foot of Montgo Mountain between the capitals of two provinces: Valencia (97 km) and Alicante (96 km). Denia is an excellent place for a summer holiday, which is also interesting as a transit point for traveling to the Spanish islands. There are regular ferries from Denia to Ibiza, Mallorca, and Menorca.

Torrevieja is one of the largest and most famous resorts in Costa Blanca. Like most cities in the region, it appeared in the blink of an eye. In a matter of months, several fishing villages were replaced by a strip of many kilometers of hotels, beaches, villas, and apartments.

The main advantage of Torrevieja is its unique microclimate. The Las Salinas salt lakes located near the city enrich the local atmosphere with useful microelements.

The resort village of El Campello is not the last pearl in the necklace of the Costa Blanca resorts. It is located a 10-minute drive north of Alicante. Despite its small size, this resort is quite well known among Europeans. El Campello began to develop rapidly in the wake of the Spanish tourist boom of the late 60s. Today almost half of its real estate is owned by foreigners, generally from Northern Europe.

Most of the modern resorts in Valencia are slowly losing their unique face in the race for profit. In this regard, the resort of Javea can be called a tiny bastion that withstands the onslaught of the benefits of globalization.

Calpe is considered to be one of the most expensive pearls in the necklace of Costa Blanca resorts. Three local beaches are recognized as one of the best in all of Spain. Once a rundown fishing village, but today a modern tourist center Calpe offers tourists stunning views of the Mediterranean. These are the classic types of heavenly places that adorn the walls of thousands of travel agencies worldwide.

Orihuela is one of the Costa Blanca resorts, which for many tourists has become or promises to become the very resort of the Costa Blanca. Orihuela is one of the oldest cities in the community of Valencia, founded by the ancient Romans. Today it can be proud of its beaches and its history. Such a combination is quite rare for the Alicante resorts province since most of them are built in place of unknown villages.

Altea is located between Calpe and Benidorm, along the N332 highway, which divides the city into two parts. For the past few years, Altea has enjoyed the reputation of being one of the most luxurious resorts in Costa Blanca. The reason is the elite village of Altea Hills, located a few kilometers from the city. It was named by analogy with the famous Beverly Hills district in Hollywood. Altea Hills has hundreds of luxury villas and apartments. The Altea seascape located off its coast is one of the largest in all of Spain.

Alcoy is a city with many fascinating and curious buildings and attractions in the north of the Alicante province. Many tourists who tour Valencia know it primarily because of the Moors and Christians festival, which takes place on the streets of Alcoy on the 20th of April. The festival is the lush performance of the thousand years ago events, during which the Spanish troops fought here with the Moors.

Villajoyosa is a quiet and surprisingly elegant resort that is a five-minute drive from giant Benidorm. Despite the vicinity, Villajoyosa is almost the opposite of the main resort of Costa Blanca. While Benidorm has long been a typical overcrowded tourist center, Villajoyosa, with its colorful houses along the beach and preserved old town, represents authentic Valencia. Here are not so many tourists in comparison to Benidorm, which makes the holidays in Villajoyosa not that exhausting.

Santa Pola is known far beyond the borders of Valencia as one of the best resorts in Spain. It has all the necessary conditions to be an attractive resort for a wide range of tourists. Students, couples with children, and retirees from all over Europe want to spend their holidays in Santa Pola. Santa Paola offers 10 kilometers of excellent beaches and coves, both well-equipped and semi-wild, and extremely picturesque! Local Gran Playa and Levante beaches are great for all kinds of water sports. Windsurfing is particularly popular here.

L’Alfàs del Pi is known on the Costa Blanca as a resort where most of the private houses and cottages belong not to Spanish people, but to foreigners. The closeness of Benidorm on one side and the lack of noisy crowd on the other made L’Alfàs del Pi the capital of residences in the Costa Blanca. The most popular real estate in L’Alfàs del Pi is owned by residents of Scandinavia. This fact is once again confirmed by the restaurant of home-made Scandinavian cuisine opened here not so long ago.

Benissa is a resort town in the north of the Alicante province, located between the cities of Calpe and Moraira. The picturesque mountains, the sea, and the rich Mediterranean vegetation create an environment that is perfectly suitable for relaxing with family and friends. The advantages of Benissa as a resort have long been appreciated by many Europeans. Much of Benissa’s real estate is now owned by Germans, English, French, and Norwegians.

Benitachell is a small town, an authentic Valencian Pueblo, whose streets are still imbued with the spirit of classic Spain. The city is located between the Moraira and Javea, about 100 kilometers from Alicante airport. Benitachell is known for the picturesque curves of the coastline of the Costa Blanca in a necklace of charming Moorish-style villas, a healing Mediterranean climate, as well as delicious muscat wines. Many travelers, who once found themselves in a private sunny local paradise, prefer to stay here as long as they can.